Such wonderful onomatopoeias [yes, it’s a word…] come to mind with the word Carbonation.
But is it all fun, games, and Batman comic books?

I bring you the Case for Carbonation 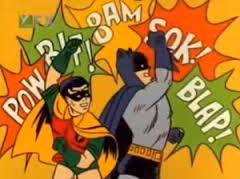 If you’ve ever read a beauty magazine around bathing suit season [which here in AZ is all year round] I’m sure you have seen the recommendation of “foods to avoid for that rockin’ beach ‘bod” and “carbonated beverages” is always on that list.
But why?
Is it warranted?
What did those poor little rounds orbs of fizz do to get blacklisted…?

Ladies and Gentleman, the Jury finds the Fizz Guilty by Association with Possibility of Parole on Good Behavior.

Allow me to explain.

All of which are

high in calories, simple carbs in the form of sugar, and virtually

zilch on nutrition – making them troublesome even if you let them go flat. So it’s not really the carbonation causing the trouble. But like the kid who ruins recess for everyone, it gets a bar wrap.

Because these beverages are so high in sugar they actually require a lot of water from your body to process and digest – so much in fact, that simply drinking it causes you to become dehydrated [making it extra dangerous in a beach/hot temperature setting where the warm temperatures cause you to perspire and you lose even more hydration through sweat].
To add salt to the wound, alcohol and soda intake actually has a favorite spot for where it stores the extra energy created by all those sugars – the abdominal area!

[NOT]
There are several physiological reasons for this [I can go into more detail individually if you have ever wanted to know about the infamous Beer Gut].

Possibility of Parole on Good Behavior

Ok so, what is carbonation?

It is essentially the state of a beverage that exists after a liquid has been pressurized with carbon dioxide gas and partially dissolved.

As you know, carbon dioxide is the air that you breathe out

It is in that sense a gas. Therefore, we can say that you when you consume a carbonated beverage, you are taking in [inhaling, if you will] a gas that the body, in normal states of functioning, is trying to expel/exhale.
This being said, it makes sense that, should the body find itself with an Outside Gas suddenly Inside, it is going to try to put it back in its natural habitat any way that it can – but most commonly out of the same orifice it entered – the mouth. Hence, the Burp.

SO why does carbonation on good behavior deserve parole? When Carbonation pairs up with its Calorie-free friend

Water, it doesn’t carry any of those extra calories mentioned above and the belching those glorious bubble induce actually helps stimulate the release of pressure from gas buildup in the stomach; making it more effective than tap water in easing symptoms of indigestion.