Some of these names look familiar? If you are one of the millions of people that have ever sat through a Psych 101 course, a few of these names should jump out.

Whether you soaked up every mind-behavior connection morsel like a sponge, avoided the inner workings of the brain like the plague, or operated on some kind of general apathy continuum towards the “Soft Sciences” – I promise you all missed a day.

It’s a shame too…because that was the day where they told you the secret to meeting your health goals and maintaining lifelong weight control.

Oh Miss Fit, how you tease…

Well I certainly talk in third-person every now and again so I suppose that’s possible.

But really. You seriously missed an important day.

Lucky for you, I hunted down the information and am prepared to give it to you right here on the internet [thank you, Al Gore] in the comfort of your own home or mobile device.

Which means the following items will hopefully NOT be needed:

[because somehow you always end up next to the smelly kid in class; honestly this problem should have ended in 3rd grade MAX, how it still happens into college is truly mind-boggling…Freudian? Perhaps that was the day *I* missed inI Psych 101…]

[to hide your Hangover; feel free to read this hung over in your birthday suit for all I care]

Lewis and a few of his cronies are the ones credited with developing the Factor Five Model, often better known as the Big Five – specifically The Big Five Personality Test.

The Factor Five Model is the best accepted and most commonly used model of personality in academic human psychology. It focuses on five measures of human personality – Conscientiousness, Agreeableness, Neuroticism, Openness, and Extraversion [sometimes the acronym CANOE is used] and uses test question responses to place people on a continuum for each of these measures and paint an overall picture of natural disposition.

What does all this have to do with weight loss?

Hang in there. Take another Selfie. Get a few Facebook Likes in and stick with me.

Let’s chat for a quick minute about CANOE.

Or I suppose you could use OCEAN.

Probably just don’t take your canoe into the ocean… Miss Fit is not responsible for any items or persons damaged in the attempt to test that theory.

Conscientiousness: reflects how careful and orderly an individual is. Conscientious individuals are generally hard working and reliable. When taken to an extreme, they may also be “workaholics”, perfectionists, and compulsive in their behavior. People who score low on conscientiousness tend to be more laid back, less goal-oriented, and less driven by success; they also are more likely to engage in antisocial and criminal behavior.

Agreeableness: reflects how much you like and try to please others. People who score high on this dimension tend to believe that most people are honest, decent, and trustworthy. People scoring low are generally less concerned with others’ well-being and report having less empathy. Therefore, these individuals are less likely to go out of their way to help others. Low agreeableness is often characterized by skepticism about other people’s motives, resulting in suspicion and unfriendliness. People very low on agreeableness have a tendency to be manipulative in social relationships and more likely to compete than to cooperate.

Neuroticism: the tendency to experience negative emotions. Individuals who score high on neuroticism are more likely than the average to experience such feelings as anxiety, anger, envy, guilt, and depressed mood. They respond more poorly to stressors, and are more likely to interpret ordinary situations as threatening, and minor frustrations as hopelessly difficult. They are often self-conscious and shy, and they may have trouble controlling urges and delaying gratification [aka impulsivity]. Neuroticism is a risk factor for the “internalizing” mental disorders such as phobia, depression, panic disorder, and other anxiety disorders, all of which are traditionally called “neuroses”.

Openness: simply, reflects how much you seek out new experiences

Extraversion: reflects how much you are oriented towards things outside yourself and derive satisfaction from interacting with other people. High scorers are said to be “extroverts” while low scorers are said to be “introverts”. Introverts will tend to become tired out by socialization, while Extroverts will be energized by it. Introverts value down time while Extroverts value stimulation.

Please note, the above are merely brief explanations. They are by no means a complete analysis of a personality type and most certainly not to be used for diagnosing your friend, family, and significant others…or is it…

Ok well that is for you to decide. But in the meantime, let’s carry on.

I want to share two studies with you that I came across recently.

The first article was from Dr Jokela and colleagues featured in the Obesity Review journal in April 2013. The article captured some hard truths and shared them openly:

“Generally, obesity treatments have poor long-term maintenance. To date, relatively little is known about factors that explain individual differences in long-term obesity risk or the likelihood of relapse in weight [gain]. Psychological dispositions, indicated by measures of personality, have been implicated in obesity risk…”

The study utilized 80,000 participants across the USA, UK, Germany, and Australia and assessed for CANOE traits using the Factor Five testing method. The data collected revealed that the Conscientiousness trait was closely linked to the persistence of obesity. Their findings read:

The second was an article written describing the work at the National Institute of Aging led by Neuroscientist Angelina Sutin.

Not to be confused with Angelina Jolie. One is a Neuroscientist and one is currently at the Box Office masquerading as Malficent.

Dr Sutin and her colleagues also found heavy correlations between CANOE scores and weight loss success/maintenance. The most dramatic finding of theirs was twofold: [1] Scoring in the top 10% [or the “90% percentile”] for Neuroticism and [2] Scoring low [bottom 30%] for Conscientiousness was correlated to an average of 22lbs of excess weight in the person over his/her lifetime.

Additionally, those high in Neuroticism and Low in Conscientiousness [must present with both for their findings to be valid] tended to be the most frequent participants in the Yo-Yo dieting cycle. 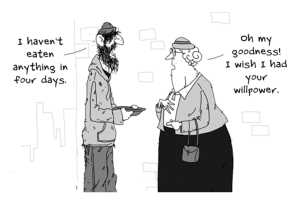 If you look back at the definitions above it can begin to take shape… High in Neuroticism tends to mean Impulsivity…someone who is Impulsive often has trouble planning ahead [food prep, etc] and resisting temptations [swing by fast food, eat the office donuts, etc] but also someone who can practice very strict, controlled behaviors at times. This matrix of self-discipline and the consequent lack thereof is the hallmark of Yo-Yo dieting.

The other part of the equation – Low on Conscientiousness – makes sense as well. Again, referring to the above definition, it tends to be the more laid back, less goal-oriented folks at baseline, so sticking to a plan and seeing it through hard times requires a lot more effort and consistent hard work than they may be willing [or able] to exert. This then makes it additionally frustrating for the individual to meet goals they may speak of but lack the due diligence to carry out, creating a gap between the life they say they want and the life they have. Which then can jump start the feelings of Neuroses…and the cycle starts all over again.

So is there any hope?

But you have to be willing to consider fitness solutions outside of the standard “programs” [ I wont mention any names here…but um.. no the Shake Weights are probably not going to be the answer…]

Dr Sutin sums it up well when she says,

“Weight Loss programs ought to be designed around personality types”… “Buying healthy groceries, having set mealtimes, and planning ahead all help significantly with weight management but these are the exact kinds of tasks [Impulsive] people struggle with”.

And THAT misfits is what Fit4Life is all about.

It’s not just about an exercise program or a gluten-free bagel. It’s about understanding the whole picture and learning what your unique set of strengths and barriers is. I know we focused on the personality types that may struggle additionally with weight management, but there are personality traits that actually work much towards your advantage. It’s about capitalizing on the strengths and working through the weaknesses.

Curious to see where you fall in the CANOE?

Comment below or contact direct at write.with.ms@gmail.com and I would be happy to get you connected with a test and work through the results with you.